The British TUC has admitted that it’s ineffective when campaigning for workers rights in the UK, even with the UK being a member of the EU.

This is why the Workers of England Union campaigns to withdraw from the European Union and do not belong to the British TUC, we believe that those organisations are holding back the campaign for workers rights, better pay and working conditions.

‘But former Labour MP and Vote Leave spokesman Ian Davidson said the Working Time Directive had not been improved since it was first drafted in 1993 because of the “death” of Social Europe’.
British get among the fewest holidays in Europe

In stark contrast, Russians enjoy 40 days off in total, counting minimum annual leave on top of public holidays, followed by the residents of Italy and Sweden, who are each allowed at least 36 days out of the office.

Across Europe, the average leave and public holiday entitlement was 33 days, according to data collected from 12 European countries by the booking website Hotels.com.

Our European neighbours celebrate far more public holidays than we do in the UK, with Spain, Italy and Russia leading the way with 12 days each.

St George’s Day has yet to be designated a public holiday in England, as has St David’s Day for Wales, while St Andrew’s Day became a public holiday for Scotland in 2007. St Patrick’s Day meanwhile is not only celebrated by the Irish but in other much further-flung destinations around the world.

The Scots therefore get nine public holidays a year, while those in Northern Ireland get 10. The English and Welsh fare worst with only eight to celebrate. These eight, combined with the statutory minimum of 20 days annual leave, gave the total of 28 days.

Globally, Mexico has the lowest amount of total days off a year, with only 13 days given to workers.

And while UK residents may bemoan the lack of annual leave from work, spare a thought for the residents of China, Thailand and Taiwan, who only receive five, six and seven days, respectively.

The countries with the most holiday entitlement are listed below:

UK workers receive the second lowest amount of public holidays in the world, according to financial services firm Mercer.

The report, which was collated in the first half of 2013, found that workers in India and Colombia enjoy the greatest number of public holidays (18).

The research also revealed that Western European countries amongst the least generous nations as employees in the UK, Hungary and Netherlands receive only eight public holidays.

But Mexico is the least generous country, with seven public holidays.

“Public holiday numbers are fluid so the data does change year-on-year; countries often hold quadrennial or one-off holidays for specific cultural or religious events and some leave the final decisions to local governments,” said Ellyn Karetnick, leader of Mercer’s global mobility practice in the UK.

“This data highlights the complexities involved – in just this small area of benefits – for those managing a globally mobile workforce. 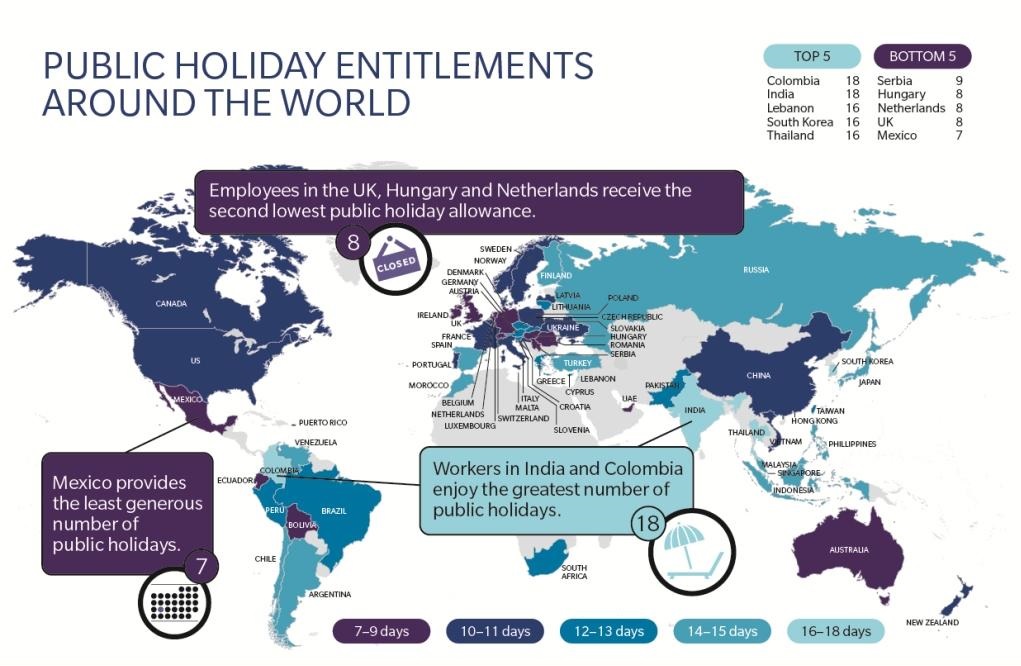 Public holidays across the globe Mercer

The research also revealed that Finland has the most generous provision of public holidays (15) in Europe,

Belgium, Luxembourg, Norway and Portugal all have ten.

Germany typically celebrates nine public holidays but this varies between states (Bundeslander) so some employees can receive up to 13.

Norway and Sweden do not count Christmas Eve and New Year’s Eve as public holidays, although these are treated as such by employers.

In Central and Eastern Europe, the Turkish Government mandates the greatest number of public holidays (14.5) followed by Russia (14) and Slovakia (13).

The Czech Republic and Lithuania both have 12 public holidays followed by Croatia (11), Poland and Ukraine (10) and Serbia and Romania (9).

“A smaller statutory holiday allowance provided to nationals is often offset by a more substantial provision of public holidays and vice versa, for example the Philippines has a statutory minimum holiday entitlement of five days but has 14 days of public holiday,” said Karetnick.