Uber drivers are not self-employed and should be paid the “national living wage”, a UK employment court has ruled in a landmark case which could affect tens of thousands of workers in the gig economy.

The ride-hailing app could now be open to claims from all of its 40,000 drivers in the UK, who are currently not entitled to holiday pay, pensions or other workers’ rights. Uber immediately said it would appeal against the ruling.

Frances O’Grady
Employment experts said other firms with large self-employed workforces could now face scrutiny of their working practices and the UK’s biggest union, Unite, announced it was setting up a new unit to pursue cases of bogus self-employment.

Research by Citizens Advice has suggested that as many as 460,000 people could be falsely classified as self-employed, costing up to £314m a year in lost tax and employer national insurance contributions. Four courier firms are already facing legal action from cyclists who want similar recognition as staff employees and the rights that go with that status, while delivery firm Hermes is under investigation by HM Revenue & Customs.

The Uber ruling could force a rethink of the gig economy business model, where companies use apps and the internet to match customers with workers. The firms do not employ the workers, but take commission from their earnings, and many have become huge global enterprises. Uber now operates around the world, with the company valued at more than £50bn. 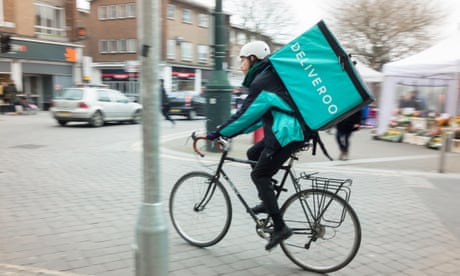 The decision of the employment tribunal comes amid mounting concern within government about the growing trend towards self-employed workforces. The government has recently announced a six-month review of modern working practices and HMRC is setting up a new unit, the employment status and intermediaries team, to investigate firms.

MPs launched an inquiry last week into pay and working conditions in the UKwhich will look at the status and rights of agency and casual workers and the self-employed for the purposes of tax, benefits and employment law, and how to protect them.

Friday’s ruling by a London employment tribunal involves a case taken by two drivers, James Farrar and Yaseen Aslam, on behalf of a group 19 Uber workers who argued that they were employed by the San Francisco-based firm, rather than working for themselves.

At a hearing in July, Farrar told how he was put under “tremendous pressure” to work long hours and accept jobs and said that there were “repercussions” from the company if he cancelled a pickup. He said some months he earned as little as £5 an hour – far below the £7.20 that employers are obliged to pay workers aged over 25.

Uber argued that it was a technology firm not a transport business and that its drivers were independent self-employed contractors who could choose where and when they worked.

The judges were scathing about Uber’s arguments, however, accusing the firm of “resorting in its documentation to fictions, twisted language and even brand new terminology” and even quoting Hamlet to suggest that the group’s UK boss was protesting too much about its position.

“The notion that Uber in London is a mosaic of 30,000 small businesses linked by a common ‘platform’ is to our minds faintly ridiculous,” the judges said. “Drivers do not and cannot negotiate with passengers … They are offered and accept trips strictly on Uber’s terms.”

Nigel Mackay from the employment team at law firm Leigh Day, which represented the drivers, said: “We are pleased that the employment tribunal has agreed with our arguments that drivers are entitled to the most basic workers’ rights, including to be paid the [national living wage] and to receive paid holiday, which were previously denied to them.

“This is a ground-breaking decision. It will impact not just on the thousands of Uber drivers working in this country, but on all workers in the so-called gig economy whose employers wrongly classify them as self-employed and deny them the rights to which they are entitled.”

The GMB union, which took up the case for the drivers, said that it was a “monumental victory” which would have an impact on thousands of workers in other industries “where bogus self-employment is rife”.

Maria Ludkin, GMB’s legal director, said: “Uber drivers and thousands of others caught in the bogus self-employment trap will now enjoy the same rights as employees. This outcome will be good for passengers, too. Properly rewarded drivers are the same side of the coin as drivers who are properly licensed and driving well-maintained and insured vehicles.”

Farrar said he was thrilled with the “emphatic” ruling. He said his industry had seen the deterioration in workers’ rights since Uber entered the market. “We’ve brought that to a halt,” he said.

Employment experts said that other firms with large self-employed workforces could now face similar action. “This judgment is likely to have massive implications, as we see an increasing number of start-up businesses effectively adopting Uber’s model,” said Tim Goodwin of law firm Winckworth Sherwood. “The effect of this judgment is that those kinds of business may owe a lot more to their workers, such as paid holiday and minimum wage, than they had bargained for.”

The ruling should be regarded as “ a salutary lesson by businesses who try to arbitrarily ‘classify’ workers as contractors to avoid affording them their full rights as workers,” Goodwin said.

The GMB’s Ludkin said employers should be “on notice” that it was reviewing similar contracts. “This is old-fashioned exploitation under new-fangled jargon, but the law will force you to pay GMB members what they are rightfully due,” she said.

There were calls for more clarity over employment status, with Citizens Advice pointing out that many people were locked out of employment tribunals by fees of up to £1,200.

“The fact it takes an employment tribunal to decide whether these drivers are self-employed shows that proving employment status is an extremely complicated and costly process,” said its chief executive, Gillian Guy. “For many people struggling at the sharp end of insecure work, such as in false self-employment, taking such a case is simply not an option.”

The ruling is not the end of the process for Uber. The firm will take the case to the employment appeal tribunal, and following its decision there could be further hearings in the court of appeal and then the supreme court. Any payments due to drivers will not be calculated until that process is over.

Other drivers with the firm will not automatically receive payouts but, if the firm accepts the ruling, it will have to change its contracts to avoid more cases being taken by drivers. Lawyers say that its terms and conditions are similar for all of its UK employees.

Jo Bertram, the regional general manager of Uber in the UK, said many of the firm’s drivers did not want to be classified as workers: “Tens of thousands of people in London drive with Uber precisely because they want to be self-employed and their own boss.

“The overwhelming majority of drivers who use the Uber app want to keep the freedom and flexibility of being able to drive when and where they want.”

All the day’s economic and financial news, including new growth reports from France, Spain and the US
Read more

£5 The hourly wage received in some months by one of the drivers who took the case.

$62.5bn Uber’s valuation based on its last round of funding.

Seven The years that Uber has been in operation.

460,000 The number of people who could be falsely classified as self-employed in the UK