Bus drivers can now report unsafe work practices without fear of being dismissed, in what is being called a “huge victory” for road safety in London.

All London bus operators will have a direct line to “Ciras” from this week – an independent arbiter workers can tell about potentially unsafe practices without fear for their jobs.

It comes at the end of a year that saw the highest number of bus-related deaths on London’s roads since 2012.

The first such tragedy of 2016 came on Monday, just four days into the new year.

A woman thought to be in her 40s died at the scene of a collision with a double-decker 472 Stagecoach bus in John Harrison Way just after 7am.

Female pedestrian dies after being hit by a bus in Greenwich

Activist Tom Kearney, who was himself left fighting for life after a bus crash in 2009, said: “This is a huge victory for danger reduction.

“It fundamentally strengthens the safety of TfL bus operations by exposing it to independent safety reporting and safety investigation lines.

“From today and for now TfL’s bus system is fundamentally safer than all others in the UK.”

Campaigners have been calling for bus drivers to have access to Ciras – which stands for confidential incident reporting analysis system – for two years.

Transport bosses initially resisted signing up bus operators to the programme, with the Mayor telling one campaigner at Mayor’s Question Time TfL’s existing internal procedures were “robust” and “more comprehensive”.

Mr Kearney claims to have spoken to a string of anonymous bus drivers who have safety concerns they feel unable to raise with their own employers – such as worries about erratic shifts they say promote tiredness at the wheel. 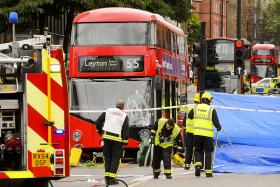 He says Ciras will encourage them and others like them to come forward.

Announcing the system’s rollout last year, TfL’s buses chief Mike Weston said: “The bus network is extremely safe but we are always looking for ways to make it even safer.

“The extension of CIRAS to bus operators will mean employees have an additional way of reporting concerns, and provides a corporate safety net to help further improve safety in the future.”

Train drivers in the capital have had access to Ciras since 1999.

TfL has pledged to “cooperate fully” with Scotland Yard’s investigation into Monday’s fatality. The bus driver was not arrested following the collision.